skip to main | skip to sidebar

We made a road trip to the ATX with plans for some bike riding and to take Kyle out to dinner to celebrate his 21st birthday.

Oh, wait... let's back up a bit. While we were eating our post-TueNightCX/ST dinner with Amber and Mack, Amber mentioned that the Big D Stair Climb was coming up and since the guys have been doing stairs for training they should enter the event. Of course it soon turned into a I'll do it if you do it challenge. Within a few minutes both of the guys had agreed to do the event that next Saturday morning. (Prior to this Alan had done 50+ flights of stairs, but it was 16 flights up/down at a time. Neither of the guys had done a straight run of 52 flights or 1020 steps).

Come Saturday morning we were up early and head downtown to meet up with Mack and Amber and then it was on to the Fountain Place building. The guys registered, put on their numbers and timing chips, then lined up for their turn at the stairs. Not knowing how long this would take - Alan was shooting for a time in the 8 - 13 minute range - Amber and I found a place to people watch and wait for the guys to race up and then come back down.

After a bit the guys showed up and then we were off to breakfast. Official times would not be posted until later and we needed to eat before driving to Austin. Alan and Mack did tell us that they were not passed by anyone and that they made steady progress through the "climbers" that started ahead of them. Alan sprinted the final four floors, through the door and then took a well earned break before coming back down.

OK - back in the ATX. We met Kyle at his place, changed into riding clothes and head out for a road ride that started in downtown Austin 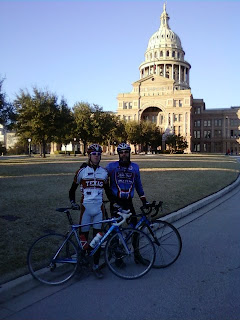 and meandered to the west to Bee Caves Road and finally to the Cuernavaca neighborhood loop. A nice 40ish mile ride which Kyle says is flat for Austin. Well, flat in the ATX does not equal flat in the BigD. It was a good workout ride for me and although Alan was hurting the first part of the ride (go figure), he got his cycling legs going and we had a good ride back finishing up with a ride through campus. 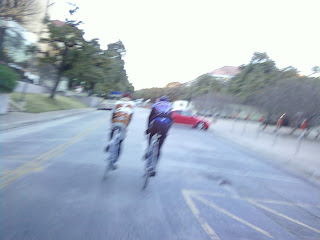 While enjoying some post-ride/birthday BBQ for dinner, Alan got a call from Mack with the results from the stair climb. Alan's time was 8:52 (yes, that's 8 minutes and 52 seconds!), which placed him in 20th overall of 600+ climbers and 1st in his age group.

I'm getting closer to a bit more current events. Hopefully, I'll be writing about February events in February!
Posted by aka Kathy at 8:18 PM

aka Kathy
There's a difference between growing older and growing up. I don't plan on growing up anytime soon.

"To be a cyclist is to be a student of pain....at cycling's core lies pain, hard and bitter as the pit inside a juicy peach. It doesn't matter if you're sprinting for an Olympic medal, a town sign, a trailhead, or the rest stop with the homemade brownies. If you never confront pain, you're missing the essence of the sport. Without pain, there's no adversity. Without adversity, no challenge. Without challenge, no improvement. No improvement, no sense of accomplishment and no deep-down joy. Might as well be playing Tiddly-Winks." Scott Martin